Voice Of The Community

Great turnout for Voice of the Community

One hundred and twenty-six guests attended the inaugural Voice of the Community event. It was hosted by Aboriginal and Torres Strait Islander media organisations from around Australia, together with media representatives Spots & Space and production company I&G Pty Ltd.

Representatives from the corporate sector were keen to take up the opportunity to meet the media at what was an unprecedented gathering in Sydney. They were joined by many government communications experts, and advertising industry professionals.

Highlights of the programme, which was staged at Sydney’s Belvoir theatre, included performances by singer songwriters Steve Pigram and Warren H. Williams, Pictured. 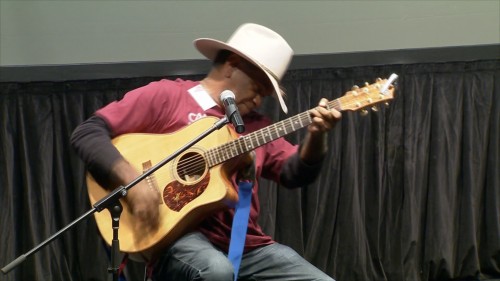 Lee Hubber, Principal of I&G presented a case study of the very successful National Indigenous Ear Health Campaign, a highly innovative initiative of the Department of Health and Ageing. The model for this campaign devolves the marketing and communications task to Aboriginal and Torres Strait Islander media partners with resulting materials perfectly tailored to the local communities.

Many of the 35 organisations involved in this campaign were present from Broome, Cairns, Darwin, the Top End, Alice Springs, The Ngaanyatjarra Lands, Sydney, Brisbane and Port Augusta.

MC Jeff McMullen reunited with many old friends in the audience. As a long-time advocate for Indigenous Australians and Honorary CEO of Ian Thorpe’s Fountain for Youth, he is very well known to the Aboriginal media sector.