I&G congratulate CAAMA Productions for winning the 2013 ATOM Award for best Instructional/Training Resource with their film Listen Up!  The Australian Teachers of Media (ATOM) Awards were announced in Melbourne last Thursday night.

Listen Up! features Shanika Cole, who lives in Alice Springs with her family.

Written and directed by Beck Cole and funded by the Department of Health and Ageing, the film is an important educational resource in combatting the high incidence of ear disease among Aboriginal and Torres Strait Islander children.

Preventable ear disease is the leading cause of hearing loss among Aboriginal Australians and is a contributing factor to ongoing Indigenous disadvantage.

CAAMA were one of 35 media organisations funded under the National Indigenous Ear Health Campaign, for which I&G were the executive producers. 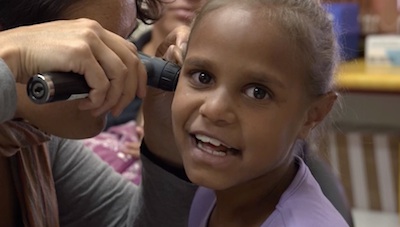