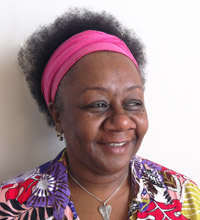 Emelda Davis was the Senior Producer on the National Indigenous Ear Health Campaign. Emelda has taken a leading role in briefing, communicating and working closely with the media partners. She has been priveliged to meet the majority of media partners face-to-face and has been able to asssist the the local coordinators to understand the project process, and parameters of the campaign. Her aim is to empower and support those individuals she has been working with.

Emelda’s diverse background as a producer, editor and project manager in film, television and also events has seen her work on various Indigenous community development projects on a Federal, State, community and grassroots level delivering content that receives national and international exposure across platforms.